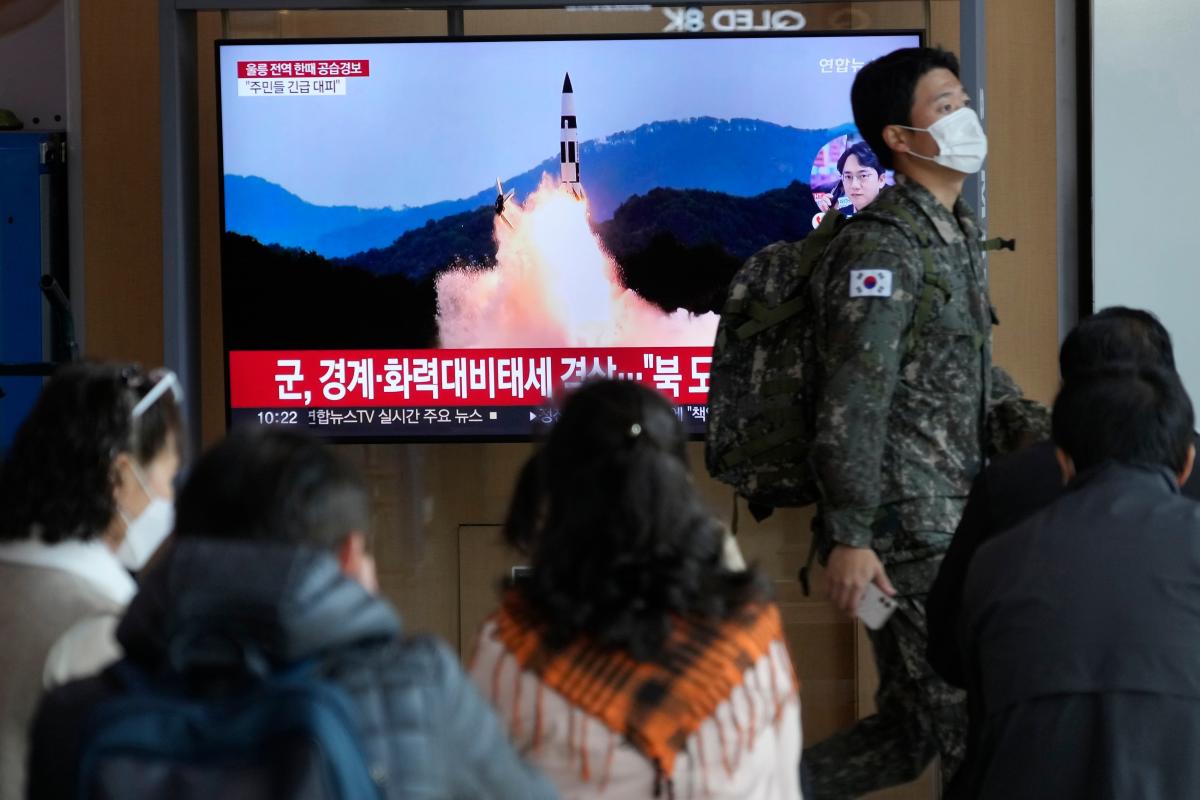 The launches are the latest in a series of North Korean weapons tests in recent months that have raised tensions in the region. They came a day after Pyongyang fired more than 20 missiles, the most it has fired in a single day ever.

South Korea’s Joint Chiefs of Staff said it detected the North firing a missile it presumed as an ICBM from an area near its capital Pyongyang around 7:40 a.m. and then firing two short-range missiles from the nearby city of Kacheon that flew toward its eastern waters.

While South Korean officials didn’t immediately release more specific flight details, the longer-range missile may have been fired on a high angle to avoid reaching the territory of neighbors. Japan’s Defense Minister Yasukazu said one of the North Korean missiles reached a maximum altitude of 2,000 kilometers (1,200 miles) and flew about 750 kilometers (460 miles).

The Japanese government initially said at least one of the missiles flew over its northern territory, but later revised its assessment, saying there were no overflies.

The office of Prime Minister Fumio Kishida issued warnings to residents in the northern prefectures of Miyagi, Yamagata and Niigata, instructing them to go inside firm buildings or underground. There have been no reports of damage or injuries from areas where the alerts were issued.

Kishida said North Korea’s missile launches are “outrageous and absolutely intolerable.” He said he will sort out further details as officials analyze the missiles.

One of the more than 20 missiles North Korea shot on Wednesday flew in the direction of a populated South Korean island and landed near the rivals’ tense sea border, triggering air raid sirens and forcing residents on Ulleung island to evacuate. South Korea quickly responded by launching its own missiles in the same border area.

Those launches came hours after North Korea threatened to use nuclear weapons to get the U.S. and South Korea to “pay the most horrible price in history” in protest of ongoing South Korean-U.S. military drills that it views as a rehearsal for a potential invasion.

North Korea last flew a missile over Japan in October in what it described as test of a new intermediate range ballistic missile, which experts say potentially would be capable of reaching Guam, a major U.S. military hub in the Pacific. That launch forced the Japanese government to issue evacuation alerts and halt trains.

North Korea has been ramping up its weapons demonstrations to a record pace this year. It has fired dozens of missiles, including its first demonstration of intercontinental ballistic missiles since 2017, as it exploits the distraction created by Russia’s war in Ukraine and a pause in diplomacy to push forward arms development and dial up pressure on the United States and its Asian allies.

The North has punctuated its tests with an escalatory nuclear doctrine that authorizes preemptive nuclear attacks over a variety of loosely defined crisis situations. U.S. and South Korean officials say North Korea may up the ante in the coming weeks with its first detonation of a nuclear test device since September 2017.