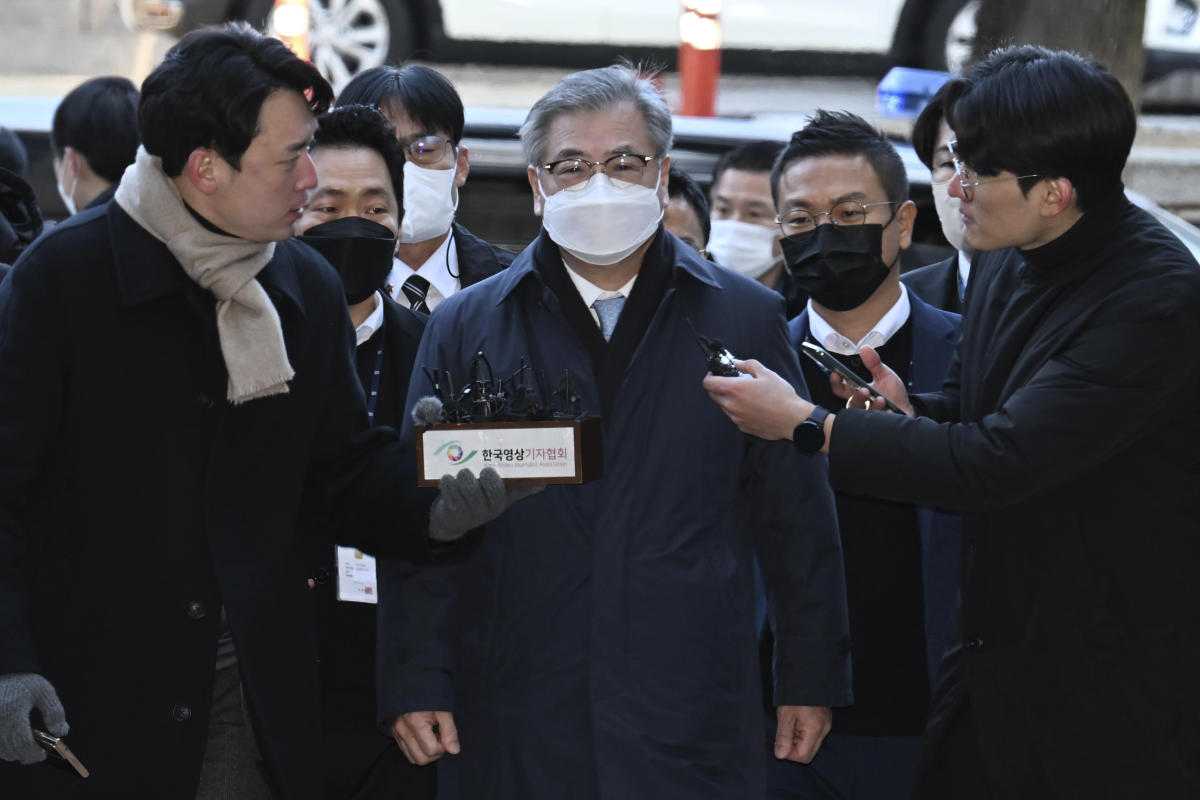 Former President Moon Jae-in, who staked his single-term on inter-Korean rapprochement before leaving office in May, has reacted angrily to the investigation into Suh’s actions. Moon issued a statement this week accusing Yoon’s government of raising groundless allegations and politicizing sensitive security matters.

Judge Kim Jeong-min of the Seoul Central District Court granted prosecutor’s request to arrest Suh over concerns that he may attempt to destroy evidence, the court said in a statement. Suh didn’t answer reporters’ questions about the allegations on Friday as he appeared at the court for a review over the prosecution’s warrant request.

A previous inquiry by South Korea’s Board of Audit and Inspection concluded that officials from Moon’s government made no meaningful attempt to rescue Lee Dae-jun after learning that the 47-year-old fisheries official was drifting in waters near the Koreas’ western sea boundary in September 2020.

After confirming that Lee had been fatally shot by North Korean troops, officials publicly played up the possibility that he had tried to defect to North Korea, citing his gambling debts and family issues, while withholding evidence suggesting he had no such intention, the audit board said in an October report.

Suh also served as Moon’s spy chief before being appointed as national security director two months before the killing. He faces suspicions that he used a Cabinet meeting to instruct officials to delete intelligence records related to the incident while the government crafted a public explanation of Lee’s death.

Suh is also suspected of ordering the Defense Ministry, National Intelligence Service, and the Coast Guard to portray Lee as trying to defect in their reports on his killing.

Critics say the Moon government went out of its way to paint Lee as unsympathetic as it tried to appease a nuclear-armed rival with a brutal human rights record.

In June, the Defense Ministry and coast guard reversed the Moon government’s description of the incident, saying there was no evidence that Lee had tried to defect.

Yoon’s government is separately investigating the 2019 forced repatriation of two North Korean fishermen, despite their reported wish to resettle in South Korea.

In July, the National Intelligence Service filed charges against Suh and his spy chief successor Park Jie-won for alleged abuse of power, destruction of public records and falsification of documents regarding the two cases.

The agency accused Park, who served as its director until May, of ordering the destruction of intelligence reports on Lee’s death. It accused Suh of forcibly closing an investigation into the circumstances surrounding the 2019 repatriation of the two North Korean fisherman captured in South Korean waters.

Critics say Moon’s government never provided a clear explanation of why it sent the two escapees back to the North to face possible execution. Moon’s officials described the men as criminals who confessed to murder and questioned the sincerity of their wish to defect.

Dozens of international organizations, including Human Rights Watch, issued a joint statement accusing Moon’s government of failing to provide due process or to “protect anyone who would be at substantial risk of torture or other serious human rights violations after repatriation.”

Moon left office with little to show for his engagement efforts with the North and the investigations into the two incidents have further tarnished his legacy.

But the diplomacy never recovered from the failure of the second Kim-Trump meeting in 2019 in Vietnam. Talks collapsed when the sides could not agree on exchanging an end to crippling U.S.-led sanctions against North Korea for steps by the North to wind down its nuclear weapons and missile programs.